Mr. Rogers said that his mother told him  in scary times to look for the helpers. Today, UU A Way Of Life is beginning a new column called, "The Helpers." This column will share stories of who the helpers are and where they are working and how they make the world a better place. 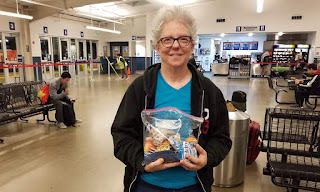 From YES! 12/17/18
Every morning, Bonita Amaro and her sister Yolanda Sanchez arrive at the Greyhound bus station in Sacramento to greet asylum-seekers passing through on their way to sponsors’ homes across the country. The two women come armed with care kits containing basic necessities, as well as blankets, toys, and fresh, warm foods, such as the burritos and sandwiches that Sanchez prepares.
“They have so much dignity, so much gratitude. We get hugs, ‘Dios te bendiga, God bless you,’” Amaro says of the asylum-seekers. “In that moment, we are not Republican or Democrat. Not religious. We don’t talk politics with them. We’re just humanitarians.”
These tías, abuelas, and other advocates call themselves the Overground Railroad. And just as sisters Amaro and Sanchez are doing in Sacramento, each day dozens of them show up at Greyhound bus stations in far-flung connecting cities where asylum-seekers, released from detention, are making their way across the country to sponsors’ homes. With grandmotherly gentleness, often speaking in a familiar language, these volunteers are waiting.
Overground Railroad, a reference to Harriet Tubman’s Underground Railroad, is an offshoot project of Grannies Respond/Abuelas Responden, which emerged this summer when a caravan of grandmother activistsjourneyed from New York to the southern U.S. border to bring comfort to asylum-seekers there—and attention to their plight. They protested and demonstrated in cities along their 2,000-mile route. By the time they reached McAllen, Texas, the number of caravanning “grandmothers” had swelled to more than 200. The idea to provide ongoing support as asylum-seekers transition to sponsor homes grew from that.

Unitarian Universalists covenenant together to affirm and promote justice, equity, and compassion in human relations.
Posted by David G. Markham at 7:00 AM