The helpers - Jahana Hayes: from the classroom to congress in 2018

Mr. Rogers said that his mother told him in scary times to look for the helpers. UU A Way Of Life has a a new column called, "The Helpers." This column will share stories of who the helpers are and where they are working and how they make the world a better place. 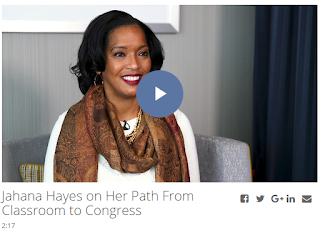 Jahana Hayes is a teacher from Connetticutt who ran for congress in 2018 and got elected. She is one of the helpers.

For a short video about Jahana click here.
Posted by David G. Markham at 7:00 AM