"The Helpers" is a regular feature of UU A Way Of Life ministries blog which appears every Friday. 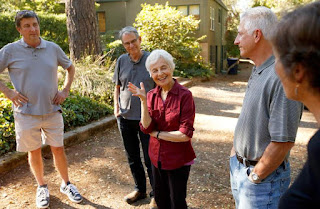 Shirley White helped saved her neighborhood from a wildfire in Santa Rosa, CA by wetting down surrounding area of her house until further help arrived in October of 2017.

Editor's note:
Fred Rogers, "Mr. Rogers," said that in times of trouble his mother told him to look for the helpers. They are like guardian angels and angels of mercy who populate our neighborhoods, communities, states, nation, and the world. You will see them all over the place when you start looking for them.

Usually they appear doing small things like holding a door, picking up a dropped object, allowing you to go ahead of them in line, saying a kind word, giving you one of their smiles.

I never used to notice them much in the past, but since Mr. Rogers mentioned that his mother told him they are everywhere, I started looking and have found that Mrs. Rogers is right.
Posted by David G. Markham at 8:30 AM