A Course In Miracles and Unitarian Universalism - Keep the faith! 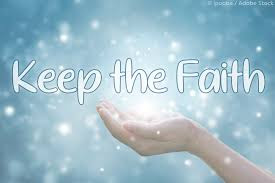 From A Course In Miracles:

T-21.III.3. Why is it strange to you that faith can move mountains?

This is indeed a little feat for such a power. For faith can keep the Son of God in chains as long as he believes he is in chains. And when he is released from them it will be simply because he no longer believes in them, withdrawing faith that they can hold him, and placing it in his freedom instead.

It is impossible to place equal faith in opposite directions. What faith you give to sin you take away from holiness. And what you offer holiness has been removed from sin.

Back in the 60s there was a common expression when one was saying good-bye which was "Keep the faith!"

I loved this expression but always wondered what it meant. What is the "faith" that one is keeping? If one UU was to say this to another UU what could this expression mean? What would "the faith" refer to which one is encouraged to keep?

In the passage above, the "faith" appears to be in freedom as compared to sin. "Sin" in A Course In Miracles refers to separation from the Oneness with God so we can pursue our own will in the world of the ego.

Unitarian Universalists practice this "faith" by living their covenant with each other to affirm and promote seven principles, the third of which is to accept one another and encourage each other's spiritual growth. It is the faith in the freeing power of the path of the Spirit (Unconditional Love) as compared to the path of the ego which is the foundation of the Unitarian Universalist faith.

"Keep the faith," in Unitarian Universalism means eschewing the ways of the world and the ego, and supporting the turning things over to the life of the Spirit and the will of God. Another way of saying this, is to become one with the Tao and go with the flow and accept the integration of the Ying and the Yang. This "going with flow" requires forgiveness which is the giving up of resentments, judgments, and grievances.

Jesus says as He is being crucified, "Father, forgive them, for they know not what they do."

This kind of faith in the foundational Love of the Universe is awesome and beyond human understanding and thus requires "faith."
Posted by David G. Markham at 10:21 AM

Email ThisBlogThis!Share to TwitterShare to FacebookShare to Pinterest
Labels: ACIM and UU, Faith