Where do you stand: center or edge? 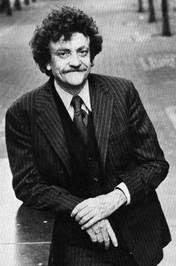 "I want to stay as close to the edge as I can without going over.  Out on the edge you see all kinds of things you can't see from the center."
—Kurt Vonnegut

As we are into campaign season with the PR roll-outs of the Democratic candidates for President of the U.S., there is some sort of moral in Kurt Vonnegut's observation. Some people have claimed that Vonnegut was UU, but from what I can find out, he identified more closely with the Humanist philosophy.

Would it be accurate to say that UUs stand more to the edge than in the center?
Posted by David G. Markham at 10:18 AM