A Course In Miracles and Unitarian Universalism - The bloodied body of Jesus of Nazareth. 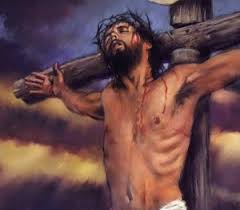 From A Course In Miracles:

T-29.VII.3. The lingering illusion will impel him to seek out a thousand idols, and to seek beyond them for a thousand more. And each will fail him, all excepting one; for he will die, and does not understand the idol that he seeks is but his death. Its form appears to be outside himself. Yet does he seek to kill God’s Son within, and prove that he is victor over him. This is the purpose every idol has, for this the role that is assigned to it, and this the role that cannot be fulfilled.

Sigmund Freud names the ultimate idol of the ego, the death wish, thanatos. We humans love war, murder, and violence which brings death or threatens one with death. Witness the popularity of movies with a lot of violence, and WWE wrestling, and our preoccupation with war, and guns, and killing things. It gives the mood altering feeling of power.

We, in America, are "second amendment" people who love our guns, 300 million of them floating around. Mass shootings arouse people's emotions and the media revels in them as do the politicians who control the public's access to these instruments of death.

Controlling death, worshiping it, makes us like God and we like to play God. We pretend its sometimes horrific and traumatic, but this is a charade because we continue to inflict it, ennoble it, and worship it.

We have made a whole religion out of the crucifying of one man's body. We have built a whole mythology about a man who supposedly cheated death by rising again in spite of his body being killed.

Unitarian Universalists covenant together to affirm and promote the inherent worth and dignity of every person which refers to the person's spirit not to his/her body. The spirit is eternal and manifests in different forms even though it is part of One. We are an extension of this Oneness whether we are consciously aware of it or not, and to assert our authority over this Oneness, we delusionally think we can kill it. This, the ego would have us believe, and this, we arrogantly align our wrong mindedness with.

Jesus allowed Himself to be crucified to demonstrate to humanity that the body and its death means nothing. It is an illusion. As the Romans were killing Him, Jesus laughed at their silliness and said, "Father, forgive them, for they know not what they do."

Jesus teaches us that making an idol out of the death of the body is nothing more than a sick joke.
Posted by David G. Markham at 1:50 PM

Email ThisBlogThis!Share to TwitterShare to FacebookShare to Pinterest
Labels: ACIM and UU, Principle 1 Worth and Dignity