Is the United States becoming the people of the lie? 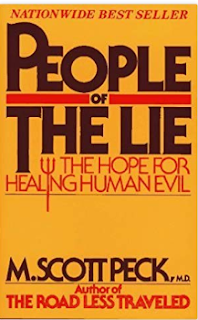 In reflecting on moral character of individuals and the effect of the moral character of the individual on society, one wonders what the affect of President Donald Trump's 13, 435 lies so far in his 1,000 day presidency is on the United States and the world? HIs lies average 13.5 per day.

M. Scott Peck wrote an interesting book The People Of The Lie in which he describes the toxic impact of blaming others rather than taking personal responsibiliy.

What do you think the toxic impact of the Executive in Chief lies are on the moral integrity of the country?
Posted by David G. Markham at 10:39 AM