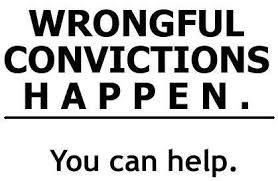 There are plenty of examples of evil in America. Injustice is rampant in our hyper-capitalist society. The way we treat the poor, the sick, the young, the old, people of minority races, offenders, is legendary. While all of these are important, perhaps one of the most egregious examples of evil is wrongful convictions and the infliction of unjust criminal justice penalties on the wrongfully proclaimed guilty.

The second principle of Untarian Universalism is that we covenant together to affirm and promote justice, equity, and compassion in human relations. This affirmation and promotion is badly needed in our contemporary society when poor people who can't mount a robust defense against false accusations are oppressed and subjugated by dysfunctional prosecutors and judges who see the administration of criminal justice as a game played in a competitive playing field based on adversarial rules of play which often are misused, abused, and corrupt.

All of this is why I support the Innocence Project which is an organization which tries to correct and rectify the injustice of our criminal justice system.

The Innocence Project has been in existence for 26 years and during that time they have accomplished many significant and wonderful things. For example, to date, 367 people in the United States have been exonerated by DNA testing, including 21 who served time on death row.