Sunday Sermons - Fourth Sunday Of Advent, Tune in to the right frequency

Tune in to the right frequency. 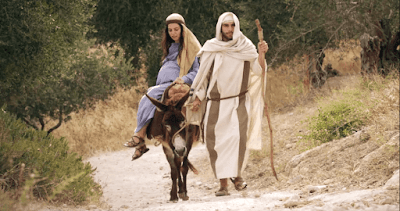 Tune in to the right frequency.

Joseph Accepts Jesus as His Son

18 This is how the birth of Jesus the Messiah came about[a]: His mother Mary was pledged to be married to Joseph, but before they came together, she was found to be pregnant through the Holy Spirit. 19 Because Joseph her husband was faithful to the law, and yet[b] did not want to expose her to public disgrace, he had in mind to divorce her quietly.

20 But after he had considered this, an angel of the Lord appeared to him in a dream and said, “Joseph son of David, do not be afraid to take Mary home as your wife, because what is conceived in her is from the Holy Spirit. 21 She will give birth to a son, and you are to give him the name Jesus,[c] because he will save his people from their sins.”

22 All this took place to fulfill what the Lord had said through the prophet: 23 “The virgin will conceive and give birth to a son, and they will call him Immanuel”[d] (which means “God with us”).
24 When Joseph woke up, he did what the angel of the Lord had commanded him and took Mary home as his wife.

I have always liked this story even before I became a Psychiatric Social Worker and a family therapist. But once I became a professional therapist and began working with families, I have come to love this story all the more.
Jesus, from the view of society, was a bastard child of an unwed mother until Joseph made a socially accepted wife and son out of them, something his society had stigmatized and would have punished, had the members of Joseph’s community had known.
Joseph was going against the grain, he was taking a mature and differentiated stand against the norms and attitudes of his society in making Mary his wife and Jesus his son. Joseph’s decision and action is auspicious for Jesus’ life. I wonder if Mary and/or Joseph ever told Jesus the truth about his paternity? I wonder if Mary and Joseph had ever told anyone?
Joseph was a courageous man, whom I admire greatly, who willingly took on the role as Jesus’, step-father. I have never heard Joseph referred to as the patron saint of step-fathers and yet as I write this, today, I will always think of him this way from this point forward.
This story in today’s gospel is about Jesus, his lineage, and his birth, but at a deeper level it is a story about Joseph and Mary’s marriage and Joseph’s commitment to form a family in an unconventional way based on a dream.
The moral of this story, looked at from Joseph’s point of view, is that going against the norms and attitudes of society to do good often takes great courage and is done with trepidation unless one has a rich inner spiritual life which is based on listening carefully and quietly to the will of God.
One of my favorite sayings about the Christmas season I found on the sidewalk sign of the United Methodist Church in Brockport, NY several decades ago which said, “You, too, can hear the angel’s song if you tune in on the right frequency.” Joseph was tuned in to the right frequency and provided Mary and Jesus with a home that nurtured their growth and well being. Joseph was a heck of a man who we would all do well to emulate. As a family therapist I take comfort and validation from Joseph’s example with many of the families I work with.
Jesus is coming and will be born in a barn in three short days. Jesus and his family are poor, and they are migrants, and they are oppressed by the taxes of the Romans. And yet, they have love and virtue, and are the spiriturally richest family in the world. They have enacted a story which has survived over 2,000 years and is celebrated worldwide year after year being told with great joy bringing peace and good will to all the world.