Climate justice - Will we take responsibility? 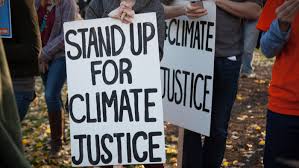 The United Nations established its climate change framework in 1992, advertising scientific consensus unmistakably to the world; this means we have now engineered as much ruin knowingly as we ever managed in ignorance.

Global warming may seem like a distended morality tale playing out over several centuries and inflicting a kind of Old Testament retribution on the great-great-grandchildren of those responsible, since it was carbon burning in eighteenth-century England that lit the fuse of everything that has followed. But that is a fable about historical villainy that acquits those of us alive today—and unfairly.

The majority of the burning has come since the premiere of Seinfeld. Since the end of World War II, the figure is about 85 percent. The story of the industrial world’s kamikaze mission is the story of a single lifetime—the planet brought from seeming stability to the brink of catastrophe in the years between a baptism or bar mitzvah and a funeral.

Inadvertently, we boomers have brought this climate warming about. We have known now for almost three decades now but awareness has been slow to occur. It is the young people who have woken us up. How will we leave our planet to our succeeding generations? What moral responsibility do we have to rectify the damage our life styles and social policies have done?

As Unitarian Univeralists be covenant together to affirm and promote a respect for the interdependent web of existence of which we are a part. Our behavior, often unconsciously, has been very disrespectful. As we learn more about the damage being done primarily with fossil fuels the more incumbent it is on us to work to rectify the situation. How?

We need to get systemically smart and elect politicians who will legislate based on social policies to limit or eliminate carbon emissions. We need to no longer support fossil fuel industries by changing our life styles, developing and using renewable energy, and withdraw our investments in financial institutions which still invest our money in fossil fuel companies.

To be continued
Posted by David G. Markham at 9:28 AM