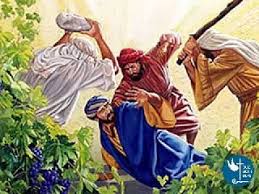 33“ Listen to another parable.

There was a landowner who planted a vineyard, put a fence around it, dug a wine press in it, and built a watchtower. Then he leased it to tenants and went to another country.

When the harvest time had come, he sent his slaves to the tenants to collect his produce. But the tenants seized his slaves and beat one, killed another, and stoned another.

Again he sent other slaves, more than the first; and they treated them in the same way.

Finally he sent his son to them, saying, ‘They will respect my son.’

But when the tenants saw the son, they said to themselves, ‘This is the heir; come, let us kill him and get his inheritance.’

So they seized him, threw him out of the vineyard, and killed him.

Now when the owner of the vineyard comes, what will he do to those tenants? They said to him, “He will put those wretches to a miserable death, and lease the vineyard to other tenants who will give him the produce at the harvest time.”

Jesus said to them, “Have you never read in the scriptures: ‘The stone that the builders rejected has become the cornerstone; a this was the Lord's doing, and it is amazing in our eyes’? Therefore I tell you, the kingdom of God will be taken away from you and given to a people that produces the fruits of the kingdom.The one who falls on this stone will be broken to pieces; and it will crush anyone on whom it falls.”

When the chief priests and the Pharisees heard his parables, they realized that he was speaking about them. 46They wanted to arrest him, but they feared the crowds, because they regarded him as a prophet.

That’s quite a story.

Some people are never satisfied. They never can get enough. No matter what they have, it is never good enough and they have to have a little bit more. They are a bottomless pit which can never be filled.

Jesus tells us in this parable that such people are never happy and even though they appear successful it is a pseudo success and have nothing of value to offer. It is often the poor, weak, and apparently unsuccessful in the eye of the world of the ego who become the cornerstone of the world of Spirit.
Those in power were upset and wanted to silence Jesus for his telling stories that they thought made them look bad. Jesus was going against the grain. Jesus was upsetting the apple cart of the current societal pecking order. Jesus was disturbing the status quo and those who benefited from the current state of affairs. The “tenants working the vineyard” were upset and wanted to silence HIm. They didn’t want to hear the truth about the world of Spirit. They wanted to continue to live comfortably in the world of the ego at everyone else’s expense.