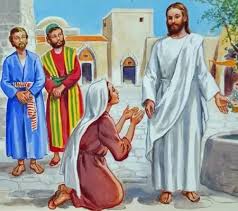 Day Fifteen, Third Wednesday of Lent
Unite or divide; dominate or serve?
Matthew 20: 17 - 28
17While Jesus was going up to Jerusalem, he took the twelve disciples aside by themselves, and said to them on the way, “ See, we are going up to Jerusalem, and the Son of Man will be handed over to the chief priests and scribes, and they will condemn him to death; then they will hand him over to the Gentiles to be mocked and flogged and crucified; and on the third day he will be raised.”

Then the mother of the sons of Zebedee came to him with her sons, and kneeling before him, she asked a favor of him.

She said to him, “Declare that these two sons of mine will sit, one at your right hand and one at your left, in your kingdom.”

But Jesus answered, “You do not know what you are asking. Are you able to drink the cup that I am about to drink?”

He said to them, “You will indeed drink my cup, but to sit at my right hand and at my left, this is not mine to grant, but it is for those for whom it has been prepared by my Father.”

When the ten heard it, they were angry with the two brothers. But Jesus called them to him and said, “You know that the rulers of the Gentiles lord it over them, and their great ones are tyrants over them. It will not be so among you; but whoever wishes to be great among you must be your servant, and whoever wishes to be first among you must be your slave; 28 just as the Son of Man came not to be served but to serve, and to give his life a ransom for many.”

Jesus didn’t believe in social status or in political power in the world of the ego. Jesus must have felt disappointed that these disciples and their mother didn’t understand the world of Spirit where things of the ego don’t exist.

Jesus tells his disciples that in the world of Spirit joining and uniting with others is what is required not separation and division.

During the season at Lent more than at other times of the year we are asked to give things up. Will you give up the things of ego? Will you give up social status and political power and see the inherent worth and dignity of every person and promote justice, equity and compassion in human relations?