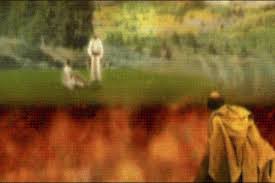 19“ There was a rich man who was dressed in purple and fine linen and who feasted sumptuously every day. And at his gate lay a poor man named Lazarus, covered with sores, who longed to satisfy his hunger with what fell from the rich man's table; even the dogs would come and lick his sores.

The poor man died and was carried away by the angels to be with Abraham. The rich man also died and was buried. In Hades, where he was being tormented, he looked up and saw Abraham far away with Lazarus by his side.He called out, ‘Father Abraham, have mercy on me, and send Lazarus to dip the tip of his finger in water and cool my tongue; for I am in agony in these flames.’

But Abraham said, ‘Child, remember that during your lifetime you received your good things, and Lazarus in like manner evil things; but now he is comforted here, and you are in agony. Besides all this, between you and us a great chasm has been fixed, so that those who might want to pass from here to you cannot do so, and no one can cross from there to us.’

He said, ‘Then, father, I beg you to send him to my father's house— for I have five brothers— that he may warn them, so that they will not also come into this place of torment.’

Abraham replied, ‘They have Moses and the prophets; they should listen to them.’

He said, ‘No, father Abraham; but if someone goes to them from the dead, they will repent.’

31He said to him, ‘If they do not listen to Moses and the prophets, neither will they be convinced even if someone rises from the dead.’”

What does it take for people to listen and learn to the Spirit? Do they have to hit bottom? Do things have to get worse before they get better?

When things in the ego world hit bottom, it dawns on people that there might be a better way to live their lives. They denied, minimized, avoided, told themselves one thing while they did another. They pretended things were okay, even great, but deep down in their hearts they knew that the things of the world of the ego can never truly satisfy and fulfill.

Society tricked them with status, pleasures, power, money and things, and other people envied them and called them “successful,” and yet there was something missing, something they couldn’t recognize and identify. They couldn’t grasp what that “something” is.

During the season of Lent we are reminded that there is something more than the things of the ego. We are encouraged to search beyond the world of the ego in the world of the spirit. In today’s story the rich man was sitting pretty and felt and saw no need to attend to his sick and impoverished neighbor. Why bother?  Why disturb his comfort?

But there came a time when the rich man recognized that he had a lot in common in the world of the Spirit with his poor and sick neighbor, and by ignoring him the rich man had failed to attain compassion and Love.

We are told that what he do for another we do for our Self. If we are all members of humanity, the so called “Body of Christ,” what we do for others makes the children of God whole, holy.

The rich man didn’t get his. He didn’t understand it. The rich man, apparently, had no spiritual life. Once he realized what he had missed, he asks Abraham to tell his brothers what they are missing, but Abraham tells him that sending someone from the dead won’t help them recognize the spiritual life they are missing because they already have Moses and the prophets and don’t listen to them so why would they listen to anyone else?

People only listen when they are ready and some people aren’t ready until they hit bottom. When they hit bottom it dawns on them that there must be a better way, and with this dawning they begin the search which is the true spiritual journey.