Lenten Reflections, Day Thirty Four, Fifth Monday of Lent, All there is, is love. 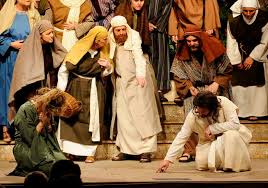 Day Thirty four, the fifth Monday of Lent.
All there is, is love.

Early in the morning he came again to the temple. All the people came to him and he sat down and began to teach them.

The scribes and the Pharisees brought a woman who had been caught in adultery; and making her stand before all of them, they said to him,“Teacher, this woman was caught in the very act of committing adultery. Now in the law Moses commanded us to stone such women. Now what do you say?”

They said this to test him, so that they might have some charge to bring against him.

When they heard it, they went away, one by one, beginning with the elders; and Jesus was left alone with the woman standing before him. Jesus straightened up and said to her, “Woman, where are they? Has no one condemned you?”

And Jesus said, “Neither do I condemn you. Go your way, and from now on do not sin again.”

This is one of my favorite bible stories. Contradicting what religions teach, Jesus does not condemn people for committing sins. Jesus, in so many words, says, “Look you made a mistake. It is a good idea if you didn’t do it again.” In other words, mistakes are learning opportunities to help us become a better person.

The scribes and the Pharisees apparently realized this too when Jesus told them that the person without sin could cast the first stone and they all walked away beginning with the eldest.

As we get older, if we grow up instead of just growing old, we become wiser and this wisdom helps us become less judgmental. The elders, being the wisest, walked away first.

Jesus is quite a teacher. He cuts through the nonsense of the ego and gets right down to the spirit of things. Jesus teaches us that God is Love and anything less is of the ego. “Sin” is an illusion, and like the Beatles sang, “All there is, is Love.”