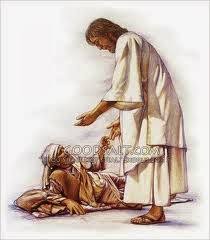 After this there was a festival of the Jews, and Jesus went up to Jerusalem. Now in Jerusalem by the Sheep Gate there is a pool, called in Hebrewc Beth-zatha, which has five porticoes. In these lay many invalids— blind, lame, and paralyzed. One man was there who had been ill for thirty-eight years. When Jesus saw him lying there and knew that he had been there a long time, he said to him, “Do you want to be made well?”

The sick man answered him, “Sir, I have no one to put me into the pool when the water is stirred up; and while I am making my way, someone else steps down ahead of me.”

Jesus said to him, “Stand up, take your mat and walk.”

At once the man was made well, and he took up his mat and began to walk. Now that day was a sabbath. So the Jews said to the man who had been cured, “It is the sabbath; it is not lawful for you to carry your mat.”

But he answered them, “The man who made me well said to me, ‘Take up your mat and walk.’”

Now the man who had been healed did not know who it was, for Jesus had disappeared ina the crowd that was there.

Later Jesus found him in the temple and said to him, “See, you have been made well! Do not sin any more, so that nothing worse happens to you.”

The man went away and told the Jews that it was Jesus who had made him well. Therefore the Jews started persecuting Jesus, because he was doing such things on the sabbath.

Another interesting story which can be interpreted on many levels. Is Jesus a magician, a miracle worker, a faith healer, or a good psychotherapist?

The man, apparently, has been playing the victim for 38 years blaming his problems on other people who get to the healing waters of the pool first. Jesus, though, isn’t  buying the “playing the victim” schtick and says to the guy, “Listen do you want to get well?”

The guy makes excuses and Jesus says to him in so many words, “You can do it. Don’t wait for others to carry you and put you in the pool, do it yourself.”

So, the guy, I imagine, says to himself, “Well, if he (Jesus) thinks I can do it and should do it, then what the heck, I’ll do it” and he stands up, takes up his mat, and walks.

Are people happy for this guy?

They tell him he shouldn’t be taking up his mat and walking around because it’s the Sabbath when observant Jews are to do no work. Instead of rejoicing at the man’s initiative and improved functioning, they attack Jesus who helped him on the Sabbath. Does this mean that psychotherapists shouldn’t work on Sundays?

As a psychotherapist myself, I don’t work on Sundays except in emergencies but I know many who do offer their services on Sundays and many clients who request office hours on Sundays.

At any rate, the things in the world of the Spirit know nothing of time and are not constrained by the limits of time. In the world of the ego, though, time can be a big deal and used to coerce and shame people as well as to coordinate activities and create a harmony for team work.

One moral of the story is that things of the Spirit, Love, trumps things of the ego like playing the victim and time. Increasingly in our digital fast paced society, time marginalizes and squelches Love. We don’t have the time or the will to make the time to attend in a loving way to other people. Jesus asks the man, “Do you want to be made well?”

Great question. What would you say? Do you want to continue playing the victim stressed by external circumstances over which you complain you have no control or would you choose to shift gears and search for a better way? The better way, as Jesus demonstrates, is not on the path of the ego, but rather on the path of the Spirit.