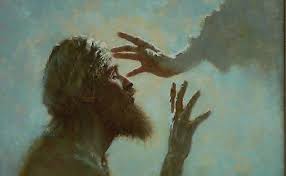 As he walked along, he saw a man blind from birth. His disciples asked him, “Rabbi, who sinned, this man or his parents, that he was born blind?”

Jesus answered, “Neither this man nor his parents sinned; he was born blind so that God's works might be revealed in him. We must work the works of him who sent me while it is day; night is coming when no one can work. As long as I am in the world, I am the light of the world.”

When he had said this, he spat on the ground and made mud with the saliva and spread the mud on the man's eyes, saying to him, “Go, wash in the pool of Siloam” (which means Sent).

Then he went and washed and came back able to see. The neighbors and those who had seen him before as a beggar began to ask, “Is this not the man who used to sit and beg?” Some were saying, “It is he.”

Others were saying, “No, but it is someone like him.”

But they kept asking him, “Then how were your eyes opened?”

He answered, “The man called Jesus made mud, spread it on my eyes, and said to me, ‘Go to Siloam and wash.’ Then I went and washed and received my sight.”

They brought to the Pharisees the man who had formerly been blind. Now it was a sabbath day when Jesus made the mud and opened his eyes.

Then the Pharisees also began to ask him how he had received his sight. He said to them, “He put mud on my eyes. Then I washed, and now I see.”

Some of the Pharisees said, “This man is not from God, for he does not observe the sabbath.” But others said, “How can a man who is a sinner perform such signs?” And they were divided.

So they said again to the blind man, “What do you say about him? It was your eyes he opened.”

The Jews did not believe that he had been blind and had received his sight until they called the parents of the man who had received his sight and asked them, “Is this your son, who you say was born blind? How then does he now see?”
His parents answered, “We know that this is our son, and that he was born blind; but we do not know how it is that now he sees, nor do we know who opened his eyes. Ask him; he is of age. He will speak for himself.” His parents said this because they were afraid of the Jews; for the Jews had already agreed that anyone who confessed Jesusa to be the Messiah would be put out of the synagogue. Therefore his parents said, “He is of age; ask him.”

So for the second time they called the man who had been blind, and they said to him, “Give glory to God! We know that this man is a sinner.”

He answered, “I do not know whether he is a sinner. One thing I do know, that though I was blind, now I see.”

They said to him, “What did he do to you? How did he open your eyes?”

He answered them, “I have told you already, and you would not listen. Why do you want to hear it again? Do you also want to become his disciples?”

Then they reviled him, saying, “You are his disciple, but we are disciples of Moses. We know that God has spoken to Moses, but as for this man, we do not know where he comes from.”

The man answered, “Here is an astonishing thing! You do not know where he comes from, and yet he opened my eyes. We know that God does not listen to sinners, but he does listen to one who worships him and obeys his will. Never since the world began has it been heard that anyone opened the eyes of a person born blind. If this man were not from God, he could do nothing.”

They answered him, “You were born entirely in sins, and are you trying to teach us?” And they drove him out.

Jesus heard that they had driven him out, and when he found him, he said, “Do you believe in the Son of Man?”

Jesus said to him, “You have seen him, and the one speaking with you is he.”

He said, “Lord, I believe.” And he worshiped him.

Jesus said, “I came into this world for judgment so that those who do not see may see, and those who do see may become blind.”

Some of the Pharisees near him heard this and said to him, “Surely we are not blind, are we?” Jesus said to them, “If you were blind, you would not have sin. But now that you say, ‘We see,’ your sin remains.”

That’s quite a story. It can be interpreted on many levels. Is Jesus a magician, a miracle worker showboating or is there some deeper meaning to the story?

If we leave the superficial literal level and attempt a deeper awareness of the metaphorical meaning we could say a few things about the story.

We are all born blind and socialized and conditioned on the path of the ego. We all, in some sense, are beggars trying to eke out a living with the goal in our material society of becoming “successful” meaning we obtain and accumulate money, status, power, prestige and security.

There comes a point when we realize that material success on the path of the ego isn’t contributing to the deeper satisfaction and fulfillment we seek so begin to search for a better way. We start looking for Love and this is what Jesus came to make us aware of. Jesus is a teacher not a magician. Jesus is a facilitative catalyst for helping people become aware of their innate worth and dignity, their holiness. When people realize that Love is their natural inheritance from their creator, they are awakened and no longer blind. They now see the light and are no longer living in darkness.

“Sin” means mistake. Jesus tells the Pharisees that they are mistaken if they think that following the laws and the rules about  adhering to the regulations of the Sabbath are going to help them experience the Love of God. Complying with the socialization and conditioning of the law is keeping them blind because they are missing the spirit of the law which is Love. If they could only see this, they would no longer be blind.

The blind man’s parents live in fear of rejection and ostracization so they side with following the rules and regulations on the path of the ego rather than opening themselves up to the ways of Love which is Jesus’ awareness and teaching helping the blind man see.

Bottom line is simple. We have a choice. Will we choose fear or Love. Jesus and the blind man chose Love and the Pharisees and the blind man’s parents chose fear. What do you choose? You will have many times today when you will be offered opportunities between fear and Love. When you become aware of these forks in the road ask yourself, “What would Love have me do?”