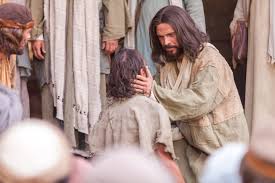 Luke 11: 14 - 23
Now he was casting out a demon that was mute; when the demon had gone out, the one who had been mute spoke, and the crowds were amazed. But some of them said, “He casts out demons by Beelzebul, the ruler of the demons.”

Others, to test him, kept demanding from him a sign from heaven. But he knew what they were thinking and said to them, “Every kingdom divided against itself becomes a desert, and house falls on house. If Satan also is divided against himself, how will his kingdom stand?— for you say that I cast out the demons by Beelzebul. Now if I cast out the demons by Beelzebul, by whom do your exorcists cast them out? Therefore they will be your judges. But if it is by the finger of God that I cast out the demons, then the kingdom of God has come to you. When a strong man, fully armed, guards his castle, his property is safe. But when one stronger than he attacks him and overpowers him, he takes away his armor in which he trusted and divides his plunder. Whoever is not with me is against me, and whoever does not gather with me scatters.”

Why is it that when people do good things there are always some people who tear them down? Are they jealous? Are they threatened in some way?

When anyone takes a principled stand, they often are going against the grain, upsetting the apple cart, disturbing the status quo, and members of the group will attack them. So, some members of the crowd attack Jesus and mock him and challenge him to give them even “more signs from heaven,” but Jesus, in a few words, says to them, “What’s up with you people?”

You’d think that people would want to work together for the common good and be pleased that an afflicted member of their community was healed, but instead they take offense that Jesus is showboating. There are members of the group who apparently think Jesus is showing off even when He is merely helping a fellow human being.

Jesus is not having their jealousy, their false accusations and says to them “Look, you can play your ego games or get on board and help me make people aware of their holiness and sanctify the world.” But, the reader gets the sense that the people would rather play their ego games than choose the way of Love. Jesus is very clear, in a few words, that people can’t have it both ways. You have to choose: the way of the ego or the way of Love. He asks people to gather with him on the way of Love. Which path do you choose?