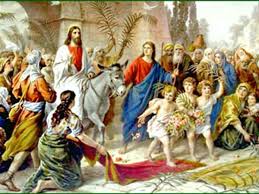 When they had come near Jerusalem and had reached Bethphage, at the Mount of Olives, Jesus sent two disciples, saying to them, “Go into the village ahead of you, and immediately you will find a donkey tied, and a colt with her; untie them and bring them to me. If anyone says anything to you, just say this, ‘The Lord needs them.’ And he will send them immediately.”

This took place to fulfill what had been spoken through the prophet, saying, “ Tell the daughter of Zion, Look, your king is coming to you, humble, and mounted on a donkey, and on a colt, the foal of a donkey.”

The disciples went and did as Jesus had directed them; they brought the donkey and the colt, and put their cloaks on them, and he sat on them. A very large crowd spread their cloaks on the road, and others cut branches from the trees and spread them on the road. The crowds that went ahead of him and that followed were shouting, “Hosanna to the Son of David! Blessed is the one who comes in the name of the Lord! Hosanna in the highest heaven!”

When he entered Jerusalem, the whole city was in turmoil, asking, “Who is this?” The crowds were saying, “This is the prophet Jesus from Nazareth in Galilee.”

The crowds were asking then as they do today in regard to Jesus, “Who is this guy?”

Some were saying that He was a prophet, but many perceived Him as a trouble maker. Some of my acquaintances today say that He was a revolutionary and a terrorist.

Jesus is the screen onto which people project all kinds of things. What people project tells us more about their minds than who Jesus was, and still is in spirit as a character in a world gripping drama which has been repeatedly told for over 2,000 years.

Palm Sunday is the first day of holy week in the Christian tradition which starts with Jesus’ acclamation and idealization and then descends into ignominy, suffering, and death, and ends with the resurrection of the Spirit into hope for Love, peace, and bliss.

The world of the ego is a fickle place and reflective people come to the point where they understand it is not to be trusted. There must be something better to put one’s faith in. This question of what’s better leads to a search. We are looking for something beyond the world of the ego and this search takes us to the realm of the Spirit. This is the realm that the story about Jesus finally takes us if we choose to go there.

We come to realize that we are not bodies. We are not bodies with spirits, but spirits with bodies and it is the Spirit that ultimately is where peace, bliss, and Love lie. Holy week demonstrates this truth if only we can discern it..