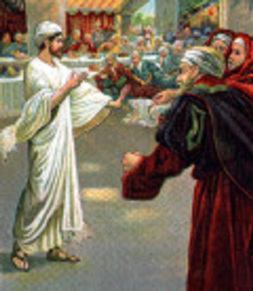 “Very truly, I tell you, whoever keeps my word will never see death.”

The Jews said to him, “Now we know that you have a demon. Abraham died, and so did the prophets; yet you say, ‘Whoever keeps my word will never taste death.’ Are you greater than our father Abraham, who died? The prophets also died. Who do you claim to be?”

Jesus answered, “If I glorify myself, my glory is nothing. It is my Father who glorifies me, he of whom you say, ‘He is our God,’ though you do not know him. But I know him; if I would say that I do not know him, I would be a liar like you. But I do know him and I keep his word. Your ancestor Abraham rejoiced that he would see my day; he saw it and was glad.”

Then the Jews said to him, “You are not yet fifty years old, and have you seen Abraham?”

Jesus said to them, “Very truly, I tell you, before Abraham was, I am.”

So they picked up stones to throw at him, but Jesus hid himself and went out of the temple.

Now that’s a funny story. It makes me laugh. People don’t understand the metaphysical psychology of Jesus at all. They take Him literally and don’t perceive, let alone understand, His mystical teaching.

The audience calls Jesus crazy. They say He has a demon in Him. They attack Jesus claiming that He is saying He is better than Abraham. Jesus laughs and tells them they misunderstand what He is saying. He says that if a person says that they do not have a divine spirit they are a liar. He, Himself, is not a liar so He cannot deny that the Divine Essence is not within Himself.

Jesus only ticks them off more and they are about to stone Him but Jesus went and hid, and then left the temple.

Every person has inherent worth and dignity. Peace Pilgrim called it a “Divine Spark.” In A Course In Miracles it is called our “natural inheritance.”

Jesus is describing a metaphysical psychology of the path of the spirit not the literal perception kof things on the path of the ego. The audience didn’t get it then and few people get it today. In order to understand Jesus, the student must shift from the world of the ego to the world of the Spirit and giving up the things of the ego, which is what Lent is about, fills most people with terror and they become vicious and violent.