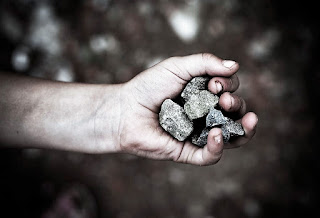 Day Thirty eight, Sixth Friday of Lent
Love the Divine Spark within others and ourselves.

The Jews took up stones again to stone him. Jesus replied, “I have shown you many good works from the Father. For which of these are you going to stone me?”

The Jews answered, “It is not for a good work that we are going to stone you, but for blasphemy, because you, though only a human being, are making yourself God.”

Jesus answered, “Is it not written in your law, ‘I said, you are gods’? If those to whom the word of God came were called ‘gods’— and the scripture cannot be annulled— can you say that the one whom the Father has sanctified and sent into the world is blaspheming because I said, ‘I am God's Son’? If I am not doing the works of my Father, then do not believe me. But if I do them, even though you do not believe me, believe the works, so that you may know and understand that the Father is in me and I am in the Father.”

Then they tried to arrest him again, but he escaped from their hands. He went away again across the Jordan to the place where John had been baptizing earlier, and he remained there. Many came to him, and they were saying, “John performed no sign, but everything that John said about this man was true.”

And many believed in him there.

Another wonderful story from John about Jesus which describes how Jesus taught that the Divine Spark was within Him just as it was within them, and they were enraged, calling His teaching blasphemy and tried to arrest Him and wanted to stone Him.

What were they so angry about? They believed in a judgmental God who punished people for sinning, making mistakes, and Jesus was teaching a different God who loved everyone and, in fact, they were all part of the Oneness of God. Jesus taught that they needed to join together and appreciate the inherent worth and dignity of every person instead of judging, dividing, separating, attacking, and excluding.

Jesus was undermining the whole rationale for their religion and lives. Jesus was a big threat to their view of life and their positions in it. They wanted to exclude the threat by silencing Him and what better way than by killing Him?

In the world of the ego, you can kill the body, but you can’t kill the Spirit because the Spirit lives on and is eternal. 2020 years later we still remember what Jesus taught and remembering, apply His teaching to our lives. We are to love the Divine spark within one another and ourselves.

In the Lenten season we are reminded to give up the things of the ego and focus on the things of the Spirit which is Love. Jesus tells the people who accuse Him and hate Him, “Even if you don’t like me, look at the things my state of consciousness has done, and believe that it is the Love of God which is within me and I am in the Love of God.” Some who were threatened by this wanted HIm gone, but then He went across the Jordan and some came to learn from Him further and they believed Him.

Where do you stand? Do you want Jesus silenced so you can enjoy the things of the ego or do you believe in the path of the Spirit where we all are part of the Love of God?