Letters from the eighth circle of hell - How's it going with the USA management of the coronavirus? 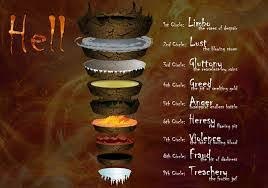 Letter from the eighth circle of hell.
How's it going with the USA management of the coronavirus?

It’s been quite a week in the US of A where the world records are being set for coronavirus cases and deaths and Trump supporters are crowing that the US is #1.

It is finally sinking in that Americans have elected a narcissistic moran for their president. With MAGA hats on, Trump supporters continue to rally through Zoom, Google Meet, Skype, and other internet sites except in states like Florida, Texas, Missouri  where Governors who are Trumpists refuse to impose social distancing and people meet up in pubs, and dinners and other public places to congratulate themselves on their esteemed leader who proclaims that he is a very stable genius and smarter than anyone even the Surgeon General and other public health professionals..

“It’s only a matter of time before they will be dropping like flies,” said Dominic. “You can’t tell these right wingers anything. The only people they listen to are Fox news pundits like Hannity.”

“They are a terrified bunch,” said Elizabeth. “They look to their esteemed leader to check his gut and tell them what he feels rather than their own mind and heart.”

Elmer said, “He promised it would disappear shortly and we could all go to church by Easter.”

“That’s not what the epidemiologists say,” said Heather.

“Maybe,” said Heather, “but they are scientists not demagogues and con artists.”

“You must be an Obama loving, Hilary loving, Democrat,” spat out Elmer.

“Sounds like you and the Trumpers will die with your MAGA hats on,” said Elizabeth.

“President Trump promised to take care of us,” said Joan.

“All the way to the grave,” said Elizabeth.

And that’s how it’s been in a country with no leadership at the Federal level. It’s every state for itself. Americans are reaping what they sowed. They are getting the leadership and incompetence at the federal level that they wanted. Sarah Palin can be heard muttering in Alaska, “How’s that working for ya?”

Email ThisBlogThis!Share to TwitterShare to FacebookShare to Pinterest
Labels: Letters from hell