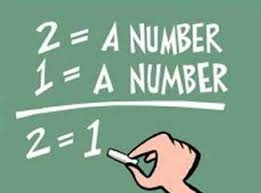 One of the biggest lies perpetrated in our postmodern culture is the idea of false equivalences. The idea that there are two or more sides to everything and that there are “alternative facts” is  a form of dastardly evil corrupting our common welfare. This idea of “fair and balanced” allows the powerful to dominate and manipulate the subjugated and oppressed minorities and sustain the control of those in authority.

The accountant asked the CEO what (s)he wanted the answer to be?

And when questioned about the accounting methodology to arrive at this “perfect answer” the accountant declared that it is “new math” which is now used to answer complicated questions which none but the most sophisticated can understand so it is best if people just take their word for it.

Truth, in the postmodern world, no longer means accuracy and correspondence with any reality, but rather consensus and sycophancy with the people in power who dispense the rewards and punishments.

Back in the 60s disinformation and disengenuousness to manipulate and exploit was called a “mind fuck.” Mind fucking is a sin and one of the most egregious forms of evil. Mind fucking may seem like a small thing, but it drives people crazy because it mystifies rather validates one’s intuitive apprehension of reality.

Unitarian Universalists covenant together to affirm and promote a free and responsible search for truth and meaning. Among UUs mindfucking is not allowed but censured. The opposite, what philosopher Jurgen Habermas calls “communicative rationality” as distinguished from “strategic rationality”, is encouraged and promoted in our covenantal relationships. “Communicative rationality” is based on authenticity, and genuineness and sincerity, what is called in everyday language “keepin it real”. “Strategic rationality” is based on exploitation, manipulation, ulterior motives, and false equivalences.

The moral, devout Unitarian Universalist strives to keep it real.