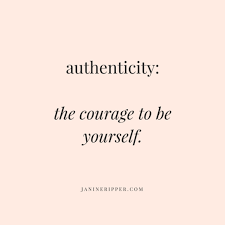 The tenth component of spiritual health is authenticity. Back in the 60s we talked about whether someone “had their shit together,” and whether they were “the real deal.” We admired and respected people who were genuine and sincere and not phoney and pretentious.

Psychologists talk about the “real” self and the “false self.” We are socialized from birth into the world of the ego which is false. The world of the ego is an illusion of which we are unaware and  socialized to believe is real. Holden Caulfield, in J.D. Salinger’s classic novel the Catcher In The Rye, called his disillusionment experience as he was coming of age the “Big Lie.” Satan is called the father of lies.

Osho teaches that we all grow old and some of us grow up. Growing old is involuntary as it is the biological process of aging. Growing up on the other hand is a choice and the choice is giving up the false, the pretense, the inauthenticity of the ego for the genuineness of the spiritual.

Jesus tells us that unless we become like little children we cannot enter the Kingdom of Heaven. What Jesus is describing is the reclamation of our innocence which has been corrupted. Jesus does not tell us to become childish meaning selfish, willful, demanding, but childlike meaning curious, in awe of the universe around us, playful, and a celebrant of existence of which we are a part.

Spiritual health requires that we know who we are, what makes us tick, and in touch with the source of our existence. Socrates said that the hallmark of wisdom is to know oneself. This knowledge comes from an inner exploration not an external one. This kind of self knowledge and wisdom comes from meditation not from an external source.

A person who values authenticity examines their life and strives to rise above the illusions of the ego and focus on the unconditional love which is the source of our existence. Authenticity arises when we put our faith in wonder, mystery, gratitude, and Unconditional Love and eschew the attributes of the ego..