The infant mortality rate in New York State is the fifth lowest in the country after California, Oregon, Massachusetts, Connecticut, and New Hampshire at 4.3 per 1,000 live births.

The infant mortality rate is highest in Mississippi at a rate of 8.3 and Louisiana at 7.6

The country with the highest infant mortality rate is Afghanistan at 110.6 and the lowest is Japan, Iceland, and Monaco with 2.00

The average infant mortality rate in OECD (Organization for Economic Cooperation and Development) countries is 3.9 per 1,000. 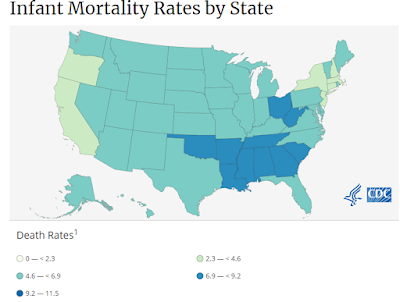 Unitarian Universalists covenant together to affirm and promote justice, equity, and compassion in human relations and the goal of world community with peace, liberty, and justice for all.

It is interesting to ask why the infant mortality rate is twice as high in Mississippi as it is in Northeastern and Western states. It is also of interest to note the difference in infant mortality between blue states and red states. Given the political differences, social policies are quite different in these states that may account for the discrepancies. Is is also interesting to note that there are significant religious differences in these regions with the Northeast, historically, being much more Unitarian than other parts of the country.