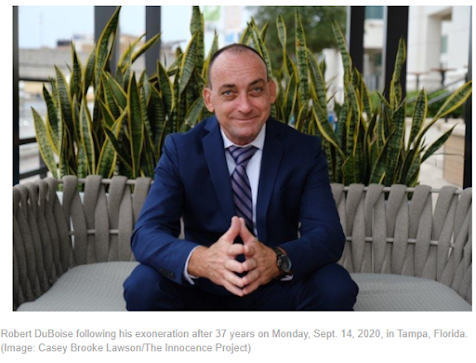 Last month, Robert DuBoise was released after spending nearly 37 years in prison for a crime he did not commit — and today, Robert was exonerated from all charges.

He was arrested in October 1983 for the rape and murder of a 19-year-old woman in Tampa, Florida. He was convicted based solely on the pseudo-science of bite mark evidence and an unreliable jailhouse informant’s testimony, and he spent three years on death row.

Last month, Robert was released after new DNA testing of crime scene evidence that was thought to have been destroyed excluded him as the assailant and identified another individual.

The state of Florida still has an uses the death penalty which was applied to Mr. DuBoise who spent 3 years on death row. The people of the State of Florida could have executed an innocent man.

UU A Way Of Life ministries supports the Innocence project financially and encourages its readers to do likewise.

Unitarian Universalists covenant together to affirm and promote justice, equity, and compassion in human relations. Supporting the Innocence Project is a very tangible, concrete way of applying this principle in our personal, social, and political lives.