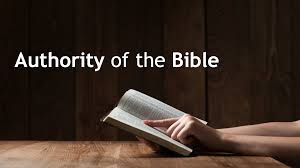 This statement is often used to justify a claim or argue a point by those who see scripture as a stable and reliable source of values in a time when social mores in the wider culture are shifting rapidly. On the other hand, many of those who are hostile to the idea of scripture say that it has been used as a weapon against their beliefs or identities.

In logic, the appeal to authority is considered fallacious, and is called argumentum ad verecundiam. The argument is that something is true just because someone considered an authority says it is so. Parents use this argument when children complain and challenge the parent with “Why do I have to?!” and the parent says, “Because I said so!”

The idea that a sacred text is the revealed word of God and, as such, has intrinsic, unchallengeable authority to determine truth has become highly suspect since the time of the enlightenment.

Even if the text is considered authoritative, who is to determine whether any particular interpretation is more correct, authentic, and /or definitive than another?

The text is held up as an idol for worship rather than the thing being referenced by the text.

Texts considered authoritative often get used in political ways giving one class of people domination and control over others.

Francis David, the Unitarian Pioneer, in the Sixteenth century, said that we need not think alike to love alike.

Jesus taught that the way to the Kingdom is Love and often condemned the Sadducees and the Pharisees for their intellectual parsing of their religious texts.

It is written in A Course In Miracles that “The Course does not aim at the teaching of love, for that is beyond what can be taught.”

Sacred texts are the finger pointing at the moon, not the moon. They are a light illuminating shadows in the darkness so that we might sense the Divine more clearly but they are not science textbooks to be taken literally or a great deal of political, psychological, social, and spiritual harm can be done.

Join our discussion group. We are hoping to have at least 10 members by the end of January. Presently, we have five.
Posted by David G. Markham at 7:29 PM