Stories about UU mystic, Harry Hollywood, Mindfulness instead of mindlessness 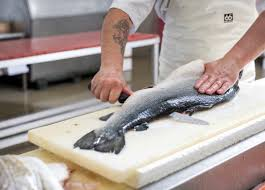 Harry was asked to give a talk about habits. He started the talk with this story.
There once was a fishmonger named Johnny who had been scaling, gutting, and fileting fish on the docks since he was eight years old. At the time of Harry meeting him Johnny was 37 and had been fishmongering for 29 years. Harry complimented him on his knife skills by saying, “The knife almost seems like a sixth digit on your right hand.”
“Yes, indeed, says Johnny, “it’s like I came out of my mother’s womb with it attached to my right hand.”
“What happened to the pinkie finger on your left hand, “asked Harry?
“In my youth, I was going too fast, and whoops along with the fish head off it goes, clean as a whistle, and nothing to be done at that point, but stop the bleeding,” says Johnny.
‘And what about that scar on your left forearm,” asks Harry?
“The floors they get slippery,” says Johnny, “and with my rubber boots and fish guts I lost my footing and slashed myself pretty good in the arm.”
Harry, pointing to the patch over Johnny’s left eye, “And what about your eye?
“It was a windy day,” said Johnny, “ and a bunch of gulls flew overhead and one of them crapped right in my eye. I forgot all about the knife.”
Harry said to his audience, “We can laugh but we all are creatures of habit behaving like automatons, sleepwalking through life, reacting mindlessly to all kinds of triggers. The goal is to become mindful and not mindless, otherwise, we all can maim ourselves as we go through life.”
Posted by David G. Markham at 8:28 AM