Religion in the public square - GOP works to restrict voting 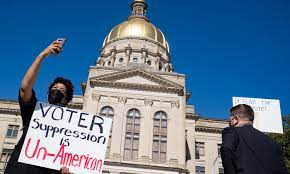 In statehouses across the country, hundreds of bills have been introduced to change how elections are run, who can vote and how they vote. Many of the bills sponsored by Republicans aim to undo changes election officials made in 2020 to make voting easier during the pandemic.

Those changes led to a record number of people voting last year. Yet the GOP bills would make voting harder. Their sponsors say it’s worth it because the proposed legislation would make elections more secure against fraud, writes political scientist Douglas Hess. Only one problem: There’s no evidence that making it easier to vote leads to more fraud.

To attempt to restrict voting is in direct violation of the fifth principle of Unitarian Universalism which is covenant together to affirm and promote the right of conscience and the use of the democratic process within our congregations and in society at large.