Prophetic women and men - Martha Hennessy and the Plowshares 7 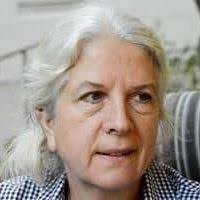 These are excerpts from The Nation, December 14/21. 2020 Free the Plowshares 7 by Maria Margonis

Ifirst met Martha Hennessy a couple of years ago ...she showed me the plastic electronic tag on her left ankle. She was out on bail, awaiting trial for her part in the Plowshares 7 symbolic disarmament action at the largest nuclear submarine base in the world, Kings Bay in Georgia, on April 4, 2018, the 50th anniversary of Martin Luther King’s assassination.

The Plowshares 7 are Catholic pacifists and antinuclear activists, committed to Isaiah’s command to “beat swords into plowshares,” in the tradition begun by Daniel and Philip Berrigan at the General Electric facility in King of Prussia, Pa., in 1980; there have been about a hundred similar actions since. ..... In October 2019, they were convicted of four federal crimes—conspiracy, destruction of government property, depredation of a naval installation, and trespassing—for which the maximum sentence is 20 years and six months in prison.

Martha wasn’t always a practicing Catholic; she’s struggled deeply with what she calls the US Catholic Church’s complicity with empire and its attitude to women. Her faith grew out of her opposition to war, and her experience of her grandmother Dorothy Day, the radical activist, mystic, and founder of the Catholic Worker movement. She remembers sitting on Dorothy’s lap as a small child, listening to her heartbeat and her voice, and sees that now as her first intimation of God: “It meant connectedness, and love, and warmth…knowing that I was part of this Mystical Body, where God is love and God is within each of us.”

A courtroom, even a virtual one, is a theater where narratives clash. Judge Lisa Wood began with the necessary litany of formalities and addressed the defense’s arguments for a reduction in the recommended sentence: 18–24 months in prison and a restitution payment of $33,503.51............The judge agreed to reduce the burden of Martha’s three previous convictions–all misdemeanors for nonviolent protest—but rejected all other arguments for a “downward departure” in sentencing.

The testimony of Martha’s four witnesses changed the atmosphere, as if someone had opened a window and let the outdoors in.

The judge listened carefully and, when they had finished, seemed almost reluctant to speak. She sentenced Martha to 10 months in federal prison which, though it could be dangerous for a woman of 65 in these pandemic times, is far less than was expected. It felt almost like victory.

All six of the Plowshares 7 sentenced so far have received new prison terms, except McAlister, who was sentenced to time served.

The second of six sources identified as  a basis for the living tradition of Unitarian Universalism is the "Words and deeds of prophetic women and men which challenge us to confront powers and structures of evil with justice, compassion, and the transforming power of love."

UU A Way Of Life periodically posts articles describing the activities of prophetic women and men. If you would like to read more such articles subscribe to the blog to receive daily notices when new articles are published.