Time of reckoning and soul searching as U.S. once again leaves a shattered nation where it waged war. 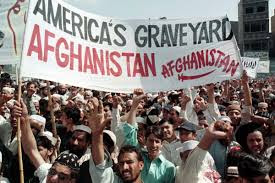 I knew back in 1965 at age 19 that the U.S. war in Vietnam was a huge mistake. I knew in 2001 at age 55 that the war in Afghanistan and Iraq was a big mistake. These assessments were based on my liberal Roman Catholic understanding of "just war" theory. It didn't take a genius using this cognitive map to understand that both wars were immoral.
And now looking at these assessments from a Unitarian Universalist lens, my understanding is even deepened with the second principle: justice, equity, and compassion in human relations, and the sixth principle: the goal of world community with peace, liberty, and justice for all. Of course, the second and sixth principles are based on the first which is the inherent worth and dignity of every person.
What is missing in UU theology is the ideas of repentance and forgiveness which are necessary as we move to a healing of our broken world.
Will the U.S. congress people ever repent for their mistaken judgement to take the nation to war? Will they ever apologize to their own soldiers killed and the people in foreign lands killed for their foolishness? Will the American people who supported their congress people and national executives for waging war apologize to those who have been harmed?
The recognition that there must be a better way to manage our international conflicts hopefully is arising as we as UUs lead the nation and world in our fourth step which is the free and responsible search for truth and meaning.
What is needed in the United States is a time of reckoning and soul searching. UUs can lead the way in this spiritual work of examination of conscience and the taking of a fearless moral inventory. Would that we will and report the results of our examination and inventory.
Posted by David G. Markham at 1:31 PM