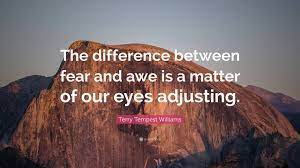 A solid foundation is necessary because of the confusion between fear and awe to which I have already referred, and which is often made. T-1.VII.5:1

“Awe” is one of those words which is rarely used in our modern and postmodern society. The distinction between fear and awe is often blurred. The bombing by the United States of Iraq was a TV spectacle which was branded as “shock and awe.” The UN declared this bombing illegal according to International Law and a war crime.

This bombing occured in the world of the ego. In the world of Spirit unconditional love fills us with awe at the magnitude of the Creative Force of the Universe. It is the opposite of fear, but the person experiencing it has to know the difference between fear and awe and most of humanity has not matured far enough yet to know the difference. A Course In Miracles is a mind training program which facilitates the development of this awareness.