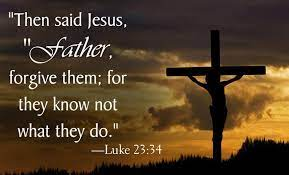 The emptiness engendered by fear must be replaced by forgiveness. That is what the bible means by “There is no death,” and why I could demonstrate that death does not exist. T-1.IV,4:1-2

Anxiety is the most diagnosed psychiatric disorder. Panic attacks are frequently experienced and complained about. People used to complain about “nervous breakdowns.” It is this anxiety and panic which the Course calls “emptiness engendered by fear.”

The antidote for this fear is not chemicals but forgiveness. Jesus was crucified on a cross after terrible torture and yet He is reported to have said as He neared death, “Father, forgive them for they know not what they do.” I imagine Jesus saying this with a laugh.

It takes a very big person to rise above this mental, verbal and physical attack and demonstrate a well being of spirit in spite of the death of the body and ego.

In Alcoholics Anonymous it is suggested in step three that we make a decision to turn our willfulness and lives over to the care of God. Jesus did it to show us it could be done.

In Unitarian Universalism people join together to affirm and promote the inherent worth and dignity of every person which emanates from the Transcendent Source which is the Ground of Being which we call “Life.” Some deny a belief in God but they cannot deny a belief in Life.

Today, it is suggested that we replace our fears with forgiveness which means that we rise above whatever is terrifying us by placing our faith in Unconditional Love.