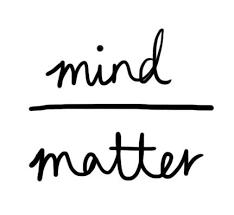 We have referred to miracles as the means of correcting level confusion, for all mistakes must be corrected at the level on which they occur. Only the mind is capable of error. The body can act wrongly only when it is responding to mis thought. The body cannot create, and the belief that it can, a fundamental error, produces all physical symptoms. T-2.IV.2:3-6 A Course In Miracles

Are we a body with a mind or a mind with a body? There is the cliche, “Mind over matter.” It is common for people to get confused and focus on many aspects of the body thinking that the body is the major source of their identity. We are not our bodies. Jesus demonstrated this when He was executed on the cross. Jesus cooperated with the Romans to allow His body to be executed to demonstrate this point. The Romans killed His body but His mind has continued to influence humanity for over 2,000 years and lives among us up to this day and into our future.

In Unitarian Universalism we join together to affirm and  promote the inherent worth and dignity of every person which arises from the mind not from the body. It is in the realm of the mind that we can all join together and everybody can love everybody all the time.

Today, it is suggested that we recognize and acknowledge that we are minds and not bodies. While our bodies are separate in the world of the ego, our minds can be joined in the realm of Spirit.