Moral injuries and suicide by soldiers. 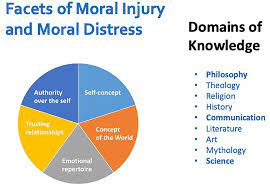 I mean that the Church might not be able to wait passively for penitents to come to the sacrament for healing. One reason the Church can’t stand by and wait is the deep cultural narrative about military service in the United States. According to that narrative, those who serve in uniform are heroes. We must support the troops. What the troops are up to usually isn’t part of the discussion. The thing to do—the only thing to do—is support them. P.17, War and Penance, Philip G. Porter, Commonweal, Jan. 2022

Supposing there is guilt for what has been seen and done by troops in our U.S. wars?

Demonizing the returning soldiers can drive them to despair, to conclude that Christ’s forgiveness is not available to them. Heroizing soldiers causes the opposite but equally damaging problem: presumption. Even if a returning soldier is aware of his or her guilt, being greeted as a hero is likely to cause some cognitive dissonance: Am I wrong to feel bad about what I’ve done if people are praising and thanking me for it? P.18

Since 9/11, four times as many U.S. service members and veterans have died by suicide than have been killed in combat, according to a new report.

The research, compiled by the Costs of War Project at Brown University, found an estimated 30,177 active duty personnel and veterans who have served in the military since 9/11 have died by suicide, compared with 7,057 killed in post 9/11 military operations. The figures include all service members, not just those who served in combat during that time.

The majority of the deaths are among veterans who account for an estimated 22,261 of the suicides during that period.

What is the role of the church in assuaging such anguish, especially Unitarian Universalism? UUs covenant together to affirm and promote the acceptance of one another and encourage spiritual development in our congregations. Sounds good in principle, but where is the action in ministering to our soldiers and the people who sent them to war?

There is lip service paid to the ideas of PTSD and moral injuries, but there is no effort on the part of Unitarian Universalists to minister to those suffering from these problems. Perhaps it is time that they did to heal the long standing, repressed spiritual wounds of our society.

This is the second article in a series on the sin of war.

Email ThisBlogThis!Share to TwitterShare to FacebookShare to Pinterest
Labels: War and penance