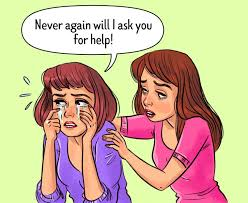 A further point must be perfectly clear before any residual fear still associated with miracles can disappear. The crucifixion did not establish the Atonement; the resurrection did. Many sincere Christians have misunderstood this. No one who is free of the belief in scarcity could possibly make this mistake. If the crucifixion is seen from an upside-down point of view, it does appear as if God permitted and even encouraged one of His Sons to suffer because he was good. This particularly unfortunate interpretation, which arose out of projection, has led many people to be bitterly afraid of God. Such anti-religious concepts enter into many religions. Yet the real Christian should pause and ask, “How could this be?” Is it likely that God Himself would be capable of the kind of thinking which His Own words have clearly stated is unworthy of His Son?T-3.I.1: 1-9

What kind of a god wants his son killed to appease his wrath for his creations' mistakes? Is this a crazy idea or what? And yet it is in this insane belief that most of Christianity is built on. The Universalists changed this idea in the 18th century in the United States.

The Universalists started to teach a theology which was the opposite of this Calvanist belief in a god who loves conditionally and taught that God loves unconditionally. This is also what Jesus of Nazareth taught before the institutional church, created in his name, started calling him the Christ. (“Christ” is not Jesus’ last name as most Chrisitans think.)

In Unitarian Universalism we join together to affirm and promote the inherent worth and dignity of every person. Unconditional love is our natural inheritance.

In Alcoholic Anonymous it is suggested, in step eleven, that we improve our conscious contact with God which brings us under the umbrella of God’s unconditional love..

Today, it is suggested that we refocus from the crucifixion to the resurrection. Jesus rose above the actions of his killers when He said, “Father, forgive them for they know not what they do.” Today, we can emulate Jesus’ example and decide not to play the victim.