What is your image of god? 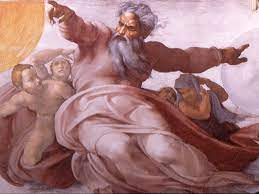 The statement “Vengeance is mine, saith the Lord” is a misperception by which one assigns his own “evil” past to God. The “evil” past has nothing to do with God. He did not create it and He does not maintain it. God does not believe in retribution. His Mind does not create that way. He does not hold your “evil” deeds against you. Is it likely that He would hold them against me? Be very sure that you recognize how utterly impossible this assumption is, and how entirely it arises from projection. This kind of error is responsible for a host of related errors, including the belief that God rejected Adam and forced him out of the Garden of Eden. It is also why you may believe from time to time that I am misdirecting you. I have made every effort to use words that are almost impossible to distort, but it is always possible to twist symbols around if you wish. T-3.I.3: 1-11

God did not make humans in His own image, but rather humans have made gods in their own image. So they have made a vengeful god who is full of wrath and condemnation, seeks to punish people for all eternity consigning them to a fiery pit of hell. What kind of god is this that humans have created and promoted and used to project their fears on and manipulated other people with?

In Alcoholics Anonymous it is suggested, in step eleven, that we improve our conscious contact with god as we understand him. What is the god of your understanding?

Today, it is suggested that we consider and reflect on the gods we have created in our fantasies. A person asked, “Do you believe in god?” Their friend answered, “It depends on what god you are talking about.” The person, an evangelical, was so offended the person broke off the relationship and never talked to their former friend again. What is your image of god?