The ego wants strokes to confirm its existence. 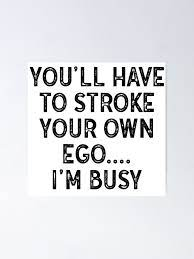 The ego’s ceaseless attempts to gain the spirit’s acknowledgment and thus establish its own existence are useless. Spirit in its knowledge is unaware of the ego. It does not attack it; it merely cannot conceive of it at all. While the ego is equally unaware of spirit, it does perceive itself as being rejected by something greater than itself. This is why self-esteem in ego terms must be delusional. T-4,II.8:5 - 9

The ego strokes itself and attempts to get strokes from others. When the ego gets these strokes its belief in itself is reinforced even if the strokes are negative. Getting strokes to confirm its illusionary existence is the basis for the games people play.