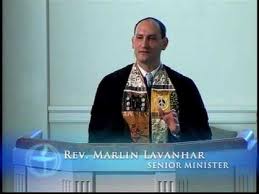 From Rev. Marlin Lavahar's Sermon, "What Is A Unitarian?" preached on 08/22/10 at All Soul's Church in Tulsa Oklahoma

One Sunday after the service, an elderly lady in her 80s came  up to me and said, “You’re not gonna believe what happened to me today.” I said, “Try me!”

She explained that she was going to one of our Sunday morning Bible classes and when she arrived and sat down, the class was already underway. She quietly took a seat in the front of the classroom.
As she listened, it didn’t take long for her to realize she was in the wrong room. It turns out that she had stumbled into a panel discussion about bisexuality. At first, she felt very uncomfortable and thought she would just get up and go, but then she realized that it might send the wrong message if she walked out. So, being the polite lady that she was, she stayed for the entire discussion.


After telling me this story she looked at me with the sweetest smile and she said, “You know what? I’m glad I stayed.” She explained that she would have never chosen to go to that talk in a million years, but she said she learned a lot. And I noticed in the years that went by, she really opened her mind and became accepting.


But, let me explain that this was not just any woman. This is the woman who, when I came as a candidate, (before I had been chosen as the minister) spoke very differently when I was speaking to the Alliances in a packed Emerson Hall back in 2000. It was like a mass interview by many of the older members of the church at the time. And this woman who I am telling you about asked me a very pointed question. That’s why I still remember it. To be honest, I don’t remember any other question from that whole day except this one. She said, “I just have one question. If you come here and become our minister, are you going to try to make this a Welcoming Congregation?” And she made it clear, by her tone, phrasing and body language that this was something she did not want.


I explained that becoming a Welcoming Congregation was something the congregation would have to decide to do; it would not be my decision, even as the Senior Minister. However, I also said, that regardless of whether the congregation decides to go through a formal process of welcoming or not, it was very important to me that whatever church I serve is welcoming to all people, including LGBT people. That seemed to satisfy the audience, because here I am, ten years later. But it was this truly kind, and wonderful elderly woman who, three years later wandered into the wrong classroom on a Sunday morning and came out transformed.


Now, it’s always been my policy to ask permission before sharing a story like that. But in this case I couldn’t, because this dear woman has since died. But I take some comfort in knowing that because of something we did here, before her life was over, a little hole in her heart, that had allowed the cold winds of prejudice to blow through, was restored. And somehow, I imagine that this is how our world, and our lives, will be redeemed – one heart at a time – as we come to cherish one another.


Welcome to All Souls: a church that tries to embody and celebrate the world as we hope it will one day become.

As I read this story that Rev. Lavanhar tells in his sermon, I am struck by the idea that the experience this lady had is what church is about. It challenges us to stretch, to reach out to others in a more understanding and compassionate way, and to grow as a result of the experience.

This lady became empowered - that is she received new information and she applied it in her relationships with people so that she acted in more compassionate ways.

She also became more self actualized in that she grew into a bigger person - her world view was enlarged in a very positive way wherein she became more aware of the inherent worth and dignity of every person especially people unlike herself.

Her own esteem was enhanced because she gained new self respect as a person who is capable of allowing new ideas into her life.

These ideas of empowerment, self actualization, enhancing esteem and self worth come about because of intentional fellowship even though the participation in the transformative experiences within the fellowship are not always intentional. These unintentional transformative experiences sometimes are described in the theological context as "grace" and indeed it is grace, but it is human facilitated. The "grace" that this woman experienced came about as a result of the culture created by human beings at All Souls in Tulsa as well as the activities of the LGBT community in the All Souls church.

All Souls is an exemplary UU church when it comes to serving human needs, empowering individuals and groups, and transforming the world.

I want my church, Brockport Unitarian Universalist Fellowship, to be like All Souls. What about you and your church?

If the Unitarian Universalism is to grow as a religious denomination it needs to figure out how to better serve human needs, empower individuals and groups, and transform the world into heaven on earth.
Posted by David G. Markham at 9:03 AM