Can we depend on the proponents of predatory capitalism to save us? 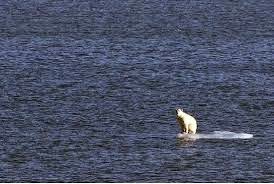 Dr. Ovid Byron is the entomologist from California who has come to Tennessee to study the butterflies. He has set up his lab in Cub and Dellarobia's barn behind their house and even hired Dellarobia as an assistant and she is getting a lot of on the job training. One day, they are up on the mountain, collecting data on the butterflies and they take a lunch break and have a discussion about how climate change is not only affecting the butterflies but life on the planet. Here is part of how Kingsolver writes the scene:

They are talking about the carbon in the atmosphere and how it contributes to a warming of the temperature of the planet.

"If you stop something, it stops," she said, sounding a little too fine.

"We used to think so. But there are unstoppable processes. Like the loss of polar ice. White ice reflects the heat of the sun directly back to space. But when it melts, the dark land and water underneath hold on to the heat. The frozen ground melts. And that releases more carbon into the air. These feedback loops keep surprising us."

How could this be true, she thought, if no one was talking about it? People with influence. Important people made such a big deal over infinitely smaller losses.

"So it's not a question of having Floridian winters in Tennessee," he said. "That's not even under discussion."

"Is there some part of this I can actually see?"

"You don't believe in things you can't see?"

She thought of Blancie Bise and Bible class. The flood of Noah, Jesus. She did try. "It's never been my long suit," she confessed.

That nearly floored her of course. Or creeked her. Since that's what was below this log, if she'd swooned off of it. How dare he belt her with that one?

"A trend is intangible, but real," he said calmly. "A photo cannot prove a child is growing, but several of them show the change over time. Align them, and you can reliably predict what is coming. You never see it all at once. An attention span is required." pp.279-280

Ah, yes, an attention span is required, something that Americans with the 24 hour cable tv news cycle, social media, texting, etc. don't possess. We go through our days with blinders on from one task to the next, pursuing one desire after another, distracting ourselves with all kinds of drama to keep our minds off of the low level anxiety which rumbles constantly in our psyches as we attempt to deny the karma which we generate on an hour to hour and day to day basis which will hold us accountable not only for our guilty pleasures but for an irresponsible life style we take for granted and even feel entitled to.

And Dellarobia, like an innocent child wonders to herself, why people with influence, our leaders, the people who we depend on to lead us and take care of us, haven't concerned themselves with this impending planetary catastrophe. Good question! And the answer is............................

There are more immediate incentives and concerns like campaign contributions from fossil fuel corporations who lobby congress for policies and laws that enhance their bottom line based on the values of what Noam Chomsky called predatory capitalism. Protecting the commons, the air we breath, the climate of our planet is what the economists call an externality that interferes with the financial bottom line.

Every day people like Cub and Dellarobia, Hester and Bear, Dovey and Crystal have no idea what is being done to them, but Dellarobia is waking up. She senses something isn't right, and Dr. Bryon, a scientist, not a theologian or a philosopher of ethics, is sharing with her the science of what is happening which tells us truths contrary to the values of predatory capitalism and corporations, who, feeling financially threatened by the awakening to the truth, are cranking up the engines of what Shane Kuhn, in his novel, The Intern's Handbook, calls the Bull Shit express.

Like the disinformation campaign of the tobacco companies when science began to show that smoking caused cancer, the fossil fuel corporations are engaging in a disinformation campaign of climate change denial. Dellarobia is losing her innocence. Her naivete is giving way to disillusionment, and she begins to question why, if what the science says is happening, is really happening, the adults in our society on whom we would like to depend, have not been taking this information more seriously to protect us.

Unitarian Universalists covenant together to affirm and promote the seventh principle,  a respect for the interdependent web of existence, and in order to do this we need to have a right understanding of the world we are just a small part of, and this requires the application of the UU fourth principle, the free and responsible search for truth and meaning. Dellarobia is a lukewarm evangelical Christian but she is awakening to the significance of the Unitarian Universalist principles. Dellarobia is growing and it is in the honor and privilege of witnessing her growth and we begin to have hope in the face of a growing sense of impending doom.