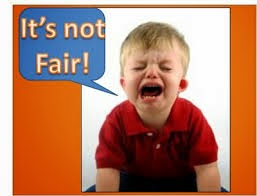 Fairness is not the same thing as justice as we have described in previous articles. Justice is compliance with laws, regulations, and ethical codes enforced by those with the power in our society to punish misbehavior. Fairness, equity, has to do with right relationship, balance, and often is proportional in the sense of "to whom much is given much is expected."

My thirteen year old daughter complained to me that I was not being fair since I was asking things of her I was not asking of her eight year old brother. I said to her, "Listen Katie, you're 13 and he's 8. You're in eighth grade and he's in third. You're a girl and he's a boy. You play the piano and he's tone deaf. He picked up and got the snake out of the house and you wouldn't even touch it with a broom. If I was to treat you fair it wouldn't be fair. The only way to be fair is not to be fair. Now go do what I asked you to do." She relented and begrudgingly did as I asked, and I had a moment of clarity. Fairness, equity, is not treating people similar or the same, but rather treating them according to what is right, meaning, what is balanced.

Fairness, equity, is about relationship, not about laws, and rules, and codes. Fairness can only be determined bilaterally or multilaterally with all the stakeholders in the situation and relationship participating in the negotiation. What might be fair and equitable for some, may not be equitable for all.

Fairness is something we feel in our guts, in our viscera. It is the first thing that children complain about when they put words together in a sentence, "Mommy it's not fair!!!!" Freud said that it was the libido which makes the world go around, our sex drive, but I disagree. Sex is nice and an important drive to ensure the perpetuation of our species, but what we, as humans, want more than anything, is equity; we want things to be fair and when things are not fair we struggle to rectify the imbalance sometimes in tragic and vengeful ways.

On the spiritual plane there is no justice, equity, and compassion because there is no need. We are one with the all and become aware that we are not separate egos but part of everything and what happens to our brothers and sisters happens to us. Our well being depends on the well being of our brothers and sisters. On this plane of unconditional love, justice, equity, and compassion have no meaning. The concepts are moot, unnecessary, irrelevant, not needed. So, what surpasses the virtues of the second principle, is Unconditional Love. Until then, if nothing else, strive to be fair, whatever that may mean in all your relationships. It is hard to experience love if things aren't fair.