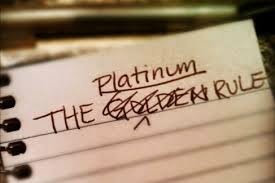 The word "compassion" means "suffering with", but it is different than sympathy which usually means the same thing. Compassion is more like empathy, being able to put oneself in the shoes of the other person, to understand the person's suffering, but not to feel the same thing, to maintain a position in one's own world and yet not allowing oneself to get into the position of the suffering person completely. Compassion in this sense is often a "one down" dynamic, someone in a better position understanding, and caring and trying to help another person in a worse position.

It takes a big person to be compassionate, to get out of one's self and consider the feelings, situation, and circumstances of another. Often people refer to the Golden rule, "do unto others as you would have them do unto you" when they think about and talk about compassion. How would you like to be treated like the other person is, or be in the other person's situation? However, the Golden Rule doesn't quite get to the essence of compassion because it is based on an ethic of self interest. Treat other people the way you want to be treated or you can't expect them to treat you the way you would like to be treated. In A Course In Miracles, this is called "give to get" which is the game of the ego. This "give to get" game is not true compassion in the spiritual sense that the second principle is asking us to affirm and promote.

I haven't found many people in my life who are mature enough, over themselves enough, to be truly compassionate. It is much easier for people to be superficially sympathetic, but to be truly compassionate takes courage, the courage to overcome the fears of people and situations and events so different from those we would want to happen to us. People don't say this verbally, but their behavior and attitudes often demonstrate the thoughts like these, "I don't want to listen to this." "I can't handle this. I'm not going there." "I'm busy enough and stressed enough with my own life than to get involved in this." etc.

Linda McCullough Moore writes a telling passage in her story, On My Own Way Now, in the Sun Magazine in April, 2014 about at elderly demented woman in a nursing home:

This singsong woman here tonight: I want to ask if she knows my mother, what with them both having light-brown hair, both playing the guitar and singing "Side by Side."
"Oh, we ain't got a barrel of money/ maybe we're ragged and funny/ but we'll travel the road/sharing our load/side by side."
"Do you know my mother?" I ask the woman.
She scowls and looks around for someone who might rescue her. She's got songs for us, but nothing else."

The singsong lady, god bless her, has sympathy and songs, but no compassion. Volunteering to sing songs for the old folks perhaps is nice enough. It's better than nothing. But the singsong lady is too frightened, to unsure about working with demented, geriatric nursing home patients, to have anything else for them.

Most of us don't have what it takes to be compassionate. Our fears of other people's differences and suffering frighten us so we keep distance, and protect ourselves. Compassion takes tremendous maturity and courage. It is a very difficult virtue to cultivate and practice. Compassion requires us to move outside our comfort zone and that is a requirement that often blocks us from becoming our better selves and being there for a person in his or her suffering.

We are called by the second principle to "suck it up", overcome our fears, rise above our egos, and extend the Love of God to another of God's creatures. After all, a brother or a sister is a part of us. When we realize that we are all in this thing called life together and that we swim or sink as part of the interdependent web of existence as one, we will have finally experienced what the second principle is naming compassion.
Posted by David G. Markham at 7:00 AM