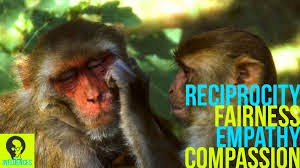 When we are sensitive and aware of the drive and desire to be fair in our relationships with others we become naturally more compassionate. Compassion flows from an awareness that often in life things are not fair for reasons far beyond the individual's control. Our heart goes out to the person whom we perceive as suffering. We want to relieve the person's suffering as much as possible.

Of course, we are often told that life isn't fair. Suck it up. Nobody owes you a living. You have to take care of yourself, don't expect a handout. In the United States since the days of Ronald Reagan this libertarian ethic of dog eat dog has grown and proliferated and led to inequality greater than at any time in our history. How this has happened in the richest, most powerful nation on earth, where abundance is visible on a grand scale, can only be explained by the triumph of the ego which demands increasing levels of assuasion, and leds to the insane and nonsensical extreme attitude that nothing is ever good enough.

The opposite of compassion is the narcissistic grandiose sense of entitlement that not only doesn't want to share but doesn't even perceive or appreciate another's need and desires. In our fears and insecurities we even view other people's suffering with contempt and disdain and congratulate ourselves for not being like "them". Marie Antoinette is often quoted as saying, when she was told of the starvation of the peasants, "If they have no bread, let them eat cake." and that has become much of the attitude in the United States promoted by the 1% who have bought our government officials and design our policies which defines our inequalities as just. There is no compassion because the inequalities are of no concern other than the extent to which they are addressed would interfere with "business".

The ethic of predatory capitalism is based on greed and there is no room for compassion. Compassion interferes with the bottom line and cannot be considered in making sound business decisions which the stockholders will approve. Most of us are complicit in this predatory capitalist ethic when we consider our stock portfolios, our 401 Ks, our retirement funds. As much as we Unitarian Universalists like to promote our second principle, when we look more deeply at the values which contribute to our financial decisions, if we are honest, we will find that they are antithetical to what we superficially profess. When it comes to making money, compassion and equity are values which are marginalized, because winning and profit become paramount. We all want a "good deal."

Jesus was clear about all of this. In fact He couldn't have been clearer. He didn't mince His words. He said directly to the rich young man, "sell all you have. Give the money to the poor, and come follow me." And, the story goes on, the rich young man became sad and walked away. We, too, know better, but, let's be practical, equity and compassion are not really in the best interest of the ego, and we, become sad, and walk away too.

We are told by the public health professionals that depression and anxiety are large mental health problems in the United States with anti-depressants, and anti-anxiety drugs being the biggest type of medications sold in the United States. We have bought so deeply into the predatory capitalistic ethic that we don't even know what ails us. We are sad and anxious because our predominant social values are not congruent with The Good Life. We pay lip service to our second principle, but we eschew any close look at the implications it has for our behavior and life style. It is this cognitive dissonance that contributes to the psychological symptoms from which so many people in our society suffer.

We Unitarian Universalists know a better way. We covenant together to affirm and promote justice, equity, and compassion. Would that we actually practice what we preach.
Posted by David G. Markham at 7:00 AM