Story of the day - Justice is a concept. Muscle is the reality. 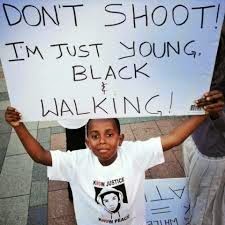 Of course, there is Linda Blanford, whoever she might be, who is quoted in the Sunbeams section of The Sun Magazine issue of June, 2014, as having said, "Justice is a concept. Muscle is the reality."

It made me chuckle to read the quote and it made me think, "Right on, Linda baby, might makes right." Justice is what those in power want it to be.

And then you think of Martin Luther King, Jr. and the civil rights protestors of 50 years ago now who taught us, as a nation, that we have unjust laws, even in the United States, the home of the brave, and the land of the free. So we are told by our rulers that in our democracy we should be grateful for our freedom, but then our names wind up on the no-fly lists, or we're driving while black, or just walking while black in New York City.

My wife says that I am too cynical and bitter and I tell her I am just realistic and she is wearing her rose colored glasses again.

The pastor preached this morning that people aren't perfect and we shouldn't expect them to be and if we are to have any peace we need to be compassionate and forgiving.

Ron Firbank, another person I have no idea who he is, is also quoted in the June, 2014, issue of The Sun saying, "The world is disgracefully managed; one hardly knows to whom to complain."

Good old Ron has got it wrong. I know exactly to whom to complain, but alas without muscle, as Linda said, they have no need to, and usually don't,  listen.
Posted by David G. Markham at 7:00 AM