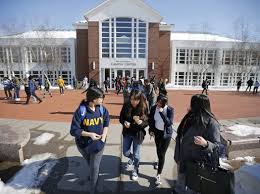 
"Nearly 100,000 undocumented immigrants are estimated to graduate from U.S. high schools every year, a new report says, although many do not have the same protection against deportation and other benefits that the “dreamers” do.
The report, based on census data, was published by the nonpartisan Migration Policy Institute, a D.C. think tank that does research and analysis to improve immigration and integration policies.
It says that some 98,000 undocumented immigrants are estimated to graduate from public high schools annually — with 44 percent living in two states: California (27 percent) and Texas (17 percent). That estimate is far higher than the 65,000 that has been cited for nearly two decades."
For more click here.
Unitarian Universalists covenant together to affirm and promote the inherent worth and dignity of every person and justice, equity, and compassion in human relations.
Posted by David G. Markham at 7:00 AM