Public theology - Trump and the evangelicals 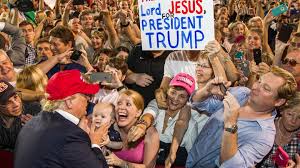 Exit polls show that Trump carried 85 percent of evangelical voters here (Texas) in 2016, a touch higher than the national white evangelical average of 81 percent. That in itself wasn’t surprising: For decades, evangelicals have been a reliable Republican constituency.

Theories about Trump’s connection with evangelical voters have long been dubiously elegant. The simplest, and perhaps most comfortable for Trump’s bewildered and furious opposition, is that evangelicals are and always were hypocrites, demanding moral rectitude from their enemies that they don’t expect from their friends. Others held that evangelicals must simply be ignorant, taken in by a campaign narrative that attempted to depict Trump as privately devoted to Christ, despite all the evidence to the contrary. Some argued that evangelicals just wanted an invincible champion to fight the culture wars, even if he didn’t share their vision of the good life. And then there was the transactional theory: Their votes were just about the Supreme Court.

There was probably some truth to every suggestion, with all the usual caveats about different individuals having different priorities, and all due distinctions made between the committedly vs. casually religious. But as 2020 approaches and evangelicals again find themselves evaluating against traditional, moderate Democrats such as Joe Biden and the ever-present possibility of just staying home, I wanted to ask evangelicals how they’re feeling about their alliance with the president and what their expectations are going into 2020.

It appears that Evangelicals have sold their souls to the devil for the transactional benefit of a authortarian willingness by Trump to protect their values. Christians did the same thing in Nazi Germany with Hitler and became complicit in the hollocaust.

What evangelicals and Trump have in common is a shared belief in their victimization by the liberal values of others who want to deprive them of Christmas with "Happy Holidays."

Evangelicals while they claim to love Jesus and His message of loving one's enemies, they admire Trump's pugilistic and vengeful attack on those who he perceives as not paying homage to his superior ego.

Trump is very egotistical and narcissitic and attacks anyone and anything that does not agree with his estimation of himself. Evangelicals operate from this same mindset and in that commonality they have found each other and have become mutually supportive. Evangelicals fervently believe that they are saved and everyone else is going to hell who has not accepted their belief and become "born again."

Bruenig predicts that evangelicals will support Trump again in 2020 and see their support of him as a holy war, a jihad of sorts, against their perceived mutual enemies.
Posted by David G. Markham at 12:09 PM