Greatest moral imperative of our time - Protect out climate. 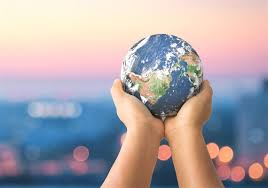 First, the project of remaking the planet so that it is undeniably ours, a project whose exhaust, the poison of emissions, now casually works its way through millennia of ice so quickly you can see the melt with a naked eye, destroying the environmental conditions that have held stable and steadily governed for literally all of human history. That has been the work of a single generation. The second generation faces a very different task: the project of preserving our collective future, forestalling that devastation and engineering an alternate path. There is simply no analogy to draw on, outside of mythology and theology—and perhaps the Cold War prospect of mutually assured destruction.

I have become aware that up until now us boomers have no idea what our lifestyles have done to the planet. We lived in a time of economic expansion and the highest quality of living ever experienced on our planet in humanity's history. We thought of it as "progress" and expected that every succeeding generation would have a better life style than the preceding generation until now.

I support Sunrise even as an old guy. I support Greta Thunberg and the young climate activists unlike the Trumpists who mock and attempt to shame them. I have gotten more politically active to assure that better climate policies are put in place, and better practices are designed and implemented. These efforts are altruistic because I am in the last phase of my life being 74, but I want a safe and satisfying world for my descendents and all others around the world. I am reminded of the Native American value that decisions should be thought of in terms of how they will affect the next seven generations.

Us boomers should be helping the succeeding generations adapt and save Mother Earth for humanity. This needs to be done with a religious fervor. The future of humanity depends on it. Will you join in this effort and commit your time, talent, treasure, and energy to these endeavors?