Climate justice - How do we manage our guilt? 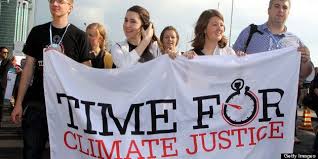 By the time my father died, in 2016, weeks after the desperate signing of the Paris Agreement, the climate system was tipping toward devastation, passing the threshold of carbon concentration—400 parts per million in the earth’s atmosphere, in the eerily banal language of climatology—that had been, for years, the bright red line environmental scientists had drawn in the rampaging face of modern industry, saying, Do not cross. Of course, we kept going: just two years later, we hit a monthly average of 411, and guilt saturates the planet’s air as much as carbon, though we choose to believe we do not breathe it.

David Wallace-Wells in his book, The Uninhabitable Earth, pulls no punches and states it like it is.

We have done it and crossed the threshold set by scientists for carbon emissions to mitigate the negative effects of climate warming. Wallace-Wells writes that "guilt saturates the planet's air as much as carbon, though we choose to believe we do not breathe it," although of course we do.

Denial, avoidance, attack of truth tellers is promulgated by the 1% who have a vested interest in the profits from fossil fuels and the fossil fuel based capitalistic economy from which they benefit while we foul our own nest and create our own hell.

We are told we are now in the "anthropocene," the human influenced ecology of the planet. The question is one of moral responsibility. Will we, as a conscious species inhabiting and influencing this ecology, take responsibility for our own behavior and policies? How do we manage our guilt if we are willing to recognize and acknowledge that we have some? Will we work together to rectify the harm we have done or will we blame one another and carry on with our destructive behavior?

What we choose, and how we behave, is the gravest moral question of this age. Will our religious institutions take the lead or secular institutions or a combination? What part do we, as indiviudals, have in influencing the organizations and groups we participate in to engage in moral activity to mitigate the damage and enhance the respect and support for the interdependent web?
Posted by David G. Markham at 8:59 AM