Climate justice - In what are we to invest our faith? 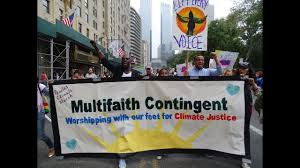 Especially those who have imbibed several centuries of Western triumphalism tend to see the story of human civilization as an inevitable conquest of the earth, rather than the saga of an insecure culture, like mold, growing haphazardly and unsurely upon it. That fragility, which pervades now everything humans might do on this planet, is the great existential insight of global warming, but it is only beginning to shake our triumphalism—though, if we had stopped to contemplate the possibilities a generation ago, it probably would not surprise us to see a new form of political nihilism emerging in the region of the world already baked hardest by global warming, the Middle East, and expressed there through suicidal spasms of theological violence.

A mythic struggle ensues, like wrestling with angels, and the outcome can be a fight to extinction or an awakening to the proper place in the interdependent web of existence of which homo sapiens is just a part and perhaps a minor part at that which could just as easily be extinguished as nurtured and supported.

The eco-anxiety taking over humanity in this growing awareness of the meaning of climate warming can make us more arrogant and invest our faith in technological and political idols or we can become more spiritually aware, humble, and take responsibility for our own functioning.

Will we look for external solutions without or will we look for spiritual solutions within, and can we do both with a humble wisdom which sees the struggle not as a war, a zero sum game between the contestants of humans and nature, but as a collaborative endeavor where we can live in harmony with nature of which we are just a part? In what are we to put our faith?