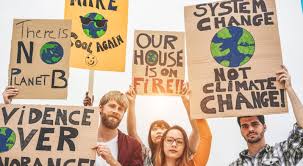 But it also isn’t necessary for Westerners to adopt the lifestyle of the global poor. Seventy percent of the energy produced by the planet, it’s estimated, is lost as waste heat. If the average American were confined by the carbon footprint of her European counterpart, U.S. carbon emissions would fall by more than half. If the world’s richest 10 percent were limited to that same footprint, global emissions would fall by a third. And why shouldn’t they be? Almost as a prophylactic against climate guilt, as the news from science has grown bleaker, Western liberals have comforted themselves by contorting their own consumption patterns into performances of moral or environmental purity—less beef, more Teslas, fewer transatlantic flights. But the climate calculus is such that individual lifestyle choices do not add up to much, unless they are scaled by politics. America’s rump climate party aside, that scaling should not be impossible, once we understand the stakes. In fact, the stakes mean, it must not be.

Turning off the lights in an empty room, recycling, setting your air conditioning to 76 degrees, collecting rain water in barrels to water your garden, giving up your Big Macs are good ideas but pissing in the ocean, farting in a huricane. The real answer to adequately addressing carbon emissions and climate warming are poltical and Americans elected a President and a Republical congress who are climate change deniers and pulled the U.S. out of the Paris Accords and brashly promote coal jobs and fossil fuel drilling.

If people spent their time and effort in organizing, voting, boycotting, and demonstrating and gettng climate justice and responsible people into policy making positions, real change could occur but alas Americans don't vote in large numbers, they are politically illiterate when it comes to most policies, they blindly vote the party line, and they believe the misinformation and propaganda which corporate media wants them to believe in spirte of the facts.

Unitarian Univeralists, we would like to believe, are more informed and principle based. They covenant together to affirm and promote the respect for the interdependent web, and for justice, equity, and compassion in human relations, but then you got to wonder whether their voting and advocacy efforts would back up their lip service? UUs are "nice" people, but not known for their toughness, their moral convictions. They have a reputation for standing for nothing and having a faith, poorly defined, and easily dismissed.

Could UUs be the yeast in the dough, the salt of the earth, the spark plug for a societal transformation from fossil fuels to renewable energy? Only if they get serious about applying their principles in their poltical lives. Hopefully, they will step up and start making a difference.