Daily Reflections, Day Seventy, What is the way to the Kingdom? 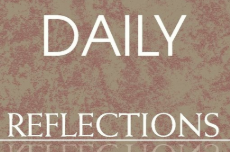 Day Seventy
What is the way to the Kingdom?

“‘No man cometh unto the Father but by me’ does not mean that I am in any way separate or different from you except in time, and time does not really exist. The statement is more meaningful in terms of a vertical rather than a horizontal axis. You stand below me and I stand below God. In the process of ‘rising up,’ I am higher because without me the distance between God and man would be too great for you to encompass. I bridge the difference as an elder brother to you on the one hand, and as a Son of God on the other. My devotion to my brothers has placed me in charge of the Sonship, which I render complete because I share it.” ACIM.T-1.II.4:1-6

There are many paths to the Oneness with God: Hinduism, Buddhism, Taoism, Judaism, Christianity, Earth Centered religions, Humanism, Philosophy, Psychology, etc. Jesus tells us that He is the same as us. The only difference is that He is enlightened, what some faith traditions name an “enlightened master” and as such is a guide, an older brother, whose teachings and example we can use as a bridge to shed our egos and achieve Oneness with the Ground of Being.

We can learn a lot from Jesus, Buddha, Lao Tse, Osho, and many prophetic witnesses to the realm of the Spirit which is our first and last home.

Most of us struggle to remember that Oneness from which we separated ourselves and emerged into this illusionary world of the ego. It is a world of hell we have entered when we left the Kingdom. Jesus and the enlightened masters teach us about our true home and how to return there.

When Jesus says that no person returns to the Father except as He has done, He is not meaning that He is the only way, but that the way, giving up the world of the ego and choosing the way of the Spirit, Love, is the only way.

Separation will not get us there, but joining and becoming One with the Body of Christ is a possible path which Jesus has taught us if only we will learn and practice the lesson.

Today, I will reflect on Jesus’ statement that the way to the Kingdom is to “love as I have loved,” and will ask, when I am called on to make a decision which will be several times today, “What would love have me do?” WWLD